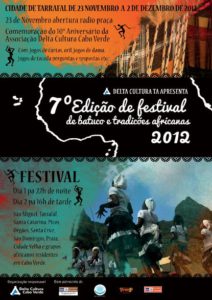 On November 23, 2012 begins the activities of the fantastic batuco festival & african traditions organized by Delta Cultura of Cape Verde.

The Batuco & African traditions festival realized annually by the capeverdean association Delta Cultura now in its 7th edition, this year will be very special because it celebrate also the 10th Delta Cultura anniversary.

A festival composed by groups from Santiago island and many others groups coming from the African continent living in Cape Verde begins its activities this year a little early on November 23, with various different kind of games such as race bags, cards, children games and so on.

The festival will reach its highlight on December 1 and 2, 2012 with a performance on stage, different groups of batuco will demonstrate the art of dancing  (rolling the waist), play the drum and “Tchabeta”

As in previous editions we expect a lot of people on the street, that with their presence worthwhile the initiative that promises as always. So confirm the groups as well as the poster of  festival, because now you are our special guest.

For further information please do not hesitate in contact the cultural responsible Marisa Correia in marisa@deltacultura.org.