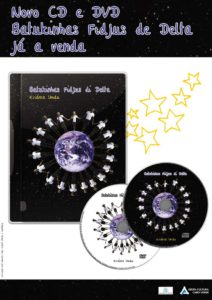 The group Batukinhas Fidjus di Delta led and created by Marisa in the year 2004 has brought their first CD/DVD out on the market. Thanks to an American Capeverdean businessman who financed the recording and production the girls can proudly present their first CD/DVD with the title Kriánsa unidu (United Children) . The Batuku group consists of 20 girls between the age 6 and 14 years old. The topics of the songs are everyday life in Cape Verde, the children of the country and of course the still recently gained freedom (35 years) of the country. Marisa composed and wrote all the lyrics of the songs. The CD/DVD will be available in the following days in Cape Verde. It is already available since yesterday in Portugal and the United States. However Delta Cultura receives ‘only’ the proceeds from the sales in Cape Verde. Delta Cultura Cabo Verde will send a share of the cds in the following weeks to Delta Cultura Austria. The CD/DVD can then be ordered via Liz Zimmermann.