Follow us on:
During 3 days, from 17 to 19 September this year, monitors and managers of the Educational Centre of Delta Cultura (ECDC), examined and shared experiences on conflict and violence resolution/management which we are confronted with in the society. The workshop was conducted by Theresia Gabriel, a psychologist from Austria – Vienna, longtime friend of the project

manager of the ECDC, Florian Wegenstein. During the workshops that have been conducted over these three days it was clear the different approaches that each had on the subject, which led the discussion to gain increased strength, therefore, relevant questions on the subject could be analyzed step-by-step. – How can we address/resolve a conflict/violence? – What is the cause of the aggressive behavior of some children and young people? – How to resolve situations of violence? – What is the window of learning? – How does our brain process when we feel defeated? – Why our limits are important and personal and how to show them? These were some of the many issues discussed. After the workshop, it was found that the time spent on these discussions were very fruitful. New ideas were shared among the participants, which from now on are going to take effect, as we will have different perception of such situations. Have this being said, we thank Theresia for new perspectives she brought to Tarrafal. 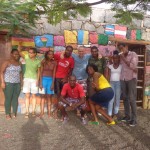