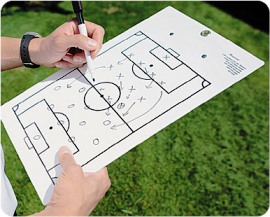 Today it is continued a football coach training of two weeks at Delta Cultura Educational Center.

The training which began yesterday, with an introductory workshop on “Football for Social Change” will be continuing until the 20th of September and is conducted by the German coach, Christoph Köhler, from FC Thun Club.

Such training includes theoretical and practical sessions with coaches.

DCCV conducts football training in the ranks of Under 7, Under 9, Under 11, Under 15, Under 17, a Senior Male Team, and a Senior Female Team, former winners of Football Regional League Northern Santiago 2015/2016.

After the training, the participants will have the opportunity to put into practice all the knowledge acquired in the training.

Their experience as future coaches can voluntarily put in practice at Delta Cultura’s football training sessions.