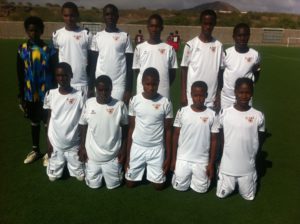 With both eyes on the national championship, edition 2012/2013 under 17, which will be held on the island of mountains (St. Antão) from July 14th to 17th of this year, the Football School of Delta Cultura (FSDC) ensured one more win at home by 3-1 against the Football School of Hope from Calheta, overlooking the national access. The FSDC has 15 points now, which places them in the second position of the regional Northern Santiago’s table, and also they are still waiting for more 9 claimed points, of which 3 are almost certain to be conceded by the Regional Football Association of Northern Santiago (RFANS). In the next journey, the FSDC will move to Orgãos to face the local football school for the final round of the regional, but still FSDC has one delayed game to play, which is yet to set the date.