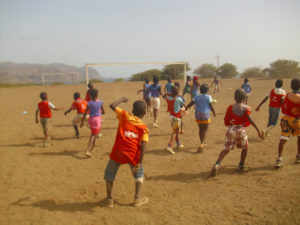 As our girls group already receive football training since a few weeks now, we organised the first game against the boys of the football school. The coaches Anna and Julia – who have received their training as football coaches at the Social Academy in Vienna – gave the girls a tactically excellent set up: as all of the girls were running behind the ball at once, it was difficult for the boys – who were technically a little bit superior –  to organise a well structured attack. Despite the frenetic fan club of the girls it were the boys who scored the first goal. Now Jassica – the teacher of the girls – had to help out as a goal keeper. She did an excellent job but in the end the boys won the game anyway. And there were no players seriously injured. A continuation is planned with mixed teams now. And so the girls won’t be left out of the game there will be rules like the goals that the girls score count double. We are looking forward to this spectacle and will report about it.