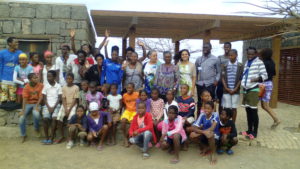 On the occasion of Tarrafal school games 2015 which runs from 8 to 11 April this year, under the motto “Wise head in an athletic body” in honor of António Dias Léger but known to us as “Xintony”, the old name and friend Minister of Education and Sports, Fernanda Marques, visited for a few minutes Delta Cultura Educational Centre (DCEC). She, who is already considered by us a guest from the house, was accompanied by the Tarrafal School Delegate, José dos Reis, as well as some other personalities linked to education in the community. She could meet with a group of young scouts from the municipality of Santa Cruz, who are spending a week of reflection in Tarrafal. But such a visit was just that, the minister was still in conversation with some of those present and listened to their concerns in relation to education, but could also play around with them, participating in the “Game of the Multiples” , a very dynamic game.